One important item I carry in my subbing bag is a book to read at break, lunch and even in the classroom when the kids are doing “silent reading time”. It’s good to set an example in the classroom.

I recently received a book in the mail detailing the “fictional” tale of an idealistic newsletter writer who gets drafted as the Parent Teacher Organization (PTO) president at his son's elementary school.

“…In the twelfth year of his marriage, sixteen months before the shooting, twenty-one shopping days until Christmas, and eight hours before he reckoned for the tenth time that his wife didn’t love him, Richard Gray met a woman who would have roughly the same effect on his life a tornado has on a trailer park.”

I have to admit that I had a hard time reading the book. Not because of the fast paced and well written storyline but the cover art seemed to draw more than a few double takes from fellow educators passing through the teachers' lounge.

Save some money, the awkward stare and get the Kindle version on Amazon... 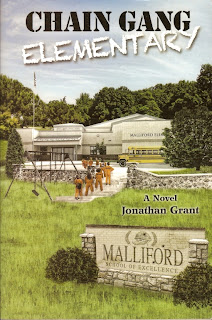 The opening paragraph of this book reads well . . . how is the rest of it? Worth the read?

Yes, I believe so.