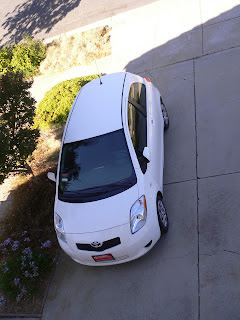 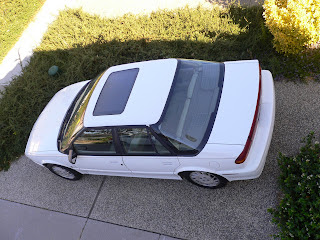 Email ThisBlogThis!Share to TwitterShare to FacebookShare to Pinterest
Labels: car

It might be completely dead this time. Don’t know for sure yet.

School resumes a month from today and it’s been almost exactly one year since I hoped to get one more year out of the “school car”. The car spends most of its time parked on the side of the driveway during the summer.

Then it began last week. I noticed that the battery indicator light was on when took it out to get gas at the local Costco. It’s been sitting idle for most of the summer so maybe the battery is just weak from non use. I’ll start driving it on short trips to at least keep the battery charged. Not a biggie.

A few short out and back trips didn’t persuade “school car” to extinguish the battery indicator. Well the battery IS five years old, so maybe it’s time for a new one. Note to self: pick up new battery on next trip to Costco. No biggie.

Uh, oh! Now I have “battery” AND “anti-lock brake” indicators showing. Coincidence? Can I make it until the weekend? It still runs and the brakes still work so hopefully not too much a biggie…right?

Yesterday, I agreed to baby-sit for my grandson and there is a Costco nearby. The plan is to take “school car” and pick up a new battery on the way back. Half way to my daughter’s house I notice that I have “battery”, “anti-lock brake” and now “air bag” indicators on…

I’m thinking it’s starting to look like a biggie…

With the grandson down for a nap and the baby monitor moved to the garage, I used son-in-law’s tools to dismantle the “way too complicated” battery cover and mounting bracket to get at the battery and terminals. Topped off the water levels, tightened all the connectors and re-started the car. No change.

Leaving my daughters place, I still have all three indicators on but now the car is idling at twice the normal rate. Half way to the Costco, the turn signals stop working.

Plans to stop at Costco are now abandoned. Now I’m hoping to just make it to the Saturn dealer a few miles further down the road before the wheels fall off.

Two miles from the dealership, the engine is racing and ALL the engine indicators are on, no turn or emergence flasher signals work and I can’t roll down the power windows to attempt hand signals to make turns.

I’m almost hit twice for changing lanes without signaling. I’m glad I can’t read lips, but I know the intent of silent shouts I see in the review mirror.

Miraculously, I make it to the dealership, coast to a stop in the service driveway and shut the engine off. Everything electrical in the car is dead. Even the dome light doesn’t come on when I open the driver’s door.

They were pushing the car into the service garage when I left. I’m tempted to just hand them the keys and walk away.

Heard back from the Saturn dealer yesterday. The conversation was something like a bizarre automotive version of "There was an old woman who swallowed a fly"

Dealer Guy: Well, we located the problem with your car.
Me: ok...

DG: The battery is completely dead. (...my original thought exactly)
Me: And?

DG: and...the cause was traced to the alternator. It's completely failed. (...good call Law and Order Teacher-- see the comments section)
Me: Anything else?

DG: Well, it appears that the power steering pump was leaking fluid onto the alternator that caused it to fail.
Me: Ouch! ...how much is this going to cost me?

So now the car is running again. My wallet is much lighter. Now I have to wonder if this is the end of major repairs for a while or just the start of a never ending litany of unknown problems to come.

(BTW: We looked at a Toyota Yaris while we were in the neighborhood)

Email ThisBlogThis!Share to TwitterShare to FacebookShare to Pinterest
Labels: car

In case you haven't heard, the whole state of California is just one big BBQ with only a guess when the last wildfire will be out.

On the good news front, one of these will be flying out of the NASA Ames Research Center at Moffett Field to help out

What can the average person expect to achieve in his or her lifetime?

While some will, I’m pretty sure most of us won’t snag a Nobel, Emmy, Golden Globe or even first prize at the county fair.

What most of us can expect to achieve is a high school diploma, a college diploma, maybe even a PhD if the money and brains hold out.

Most of us can expect to achieve finding that special someone to share a life.

Most of us can expect to achieve parenthood if so inclined.

Most of us will experience a few years in one or more careers before settling into the retired life.

I just had one of those “decade birthdays”.

I won’t say when it was or what number it was, but there were fireworks involved and let’s just say that “The Sixty’s Generation” has a whole ‘nother meaning for me now.

While any achievement in my previous career may now be obsolete (such is the pace of cutting edge software design), I now realize that true achievement isn’t all about attaining recognition, wealth or status. It’s really much more basic.

For my surprise birthday party, Claudette and daughter Jene’ compiled a “memory book”.

Now that my real memory is beginning to encounter a few “bad sector” faults, they felt that a hard copy backup was necessary. As I started to peruse my birthday book, I came across pictures and comments from lots-a-people I hadn’t expected and others I hadn’t seen for a while.

I must admit that this was an emotional moment as I realize that the following is MY true life achievement: 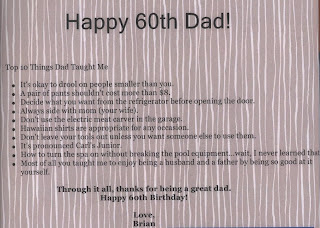 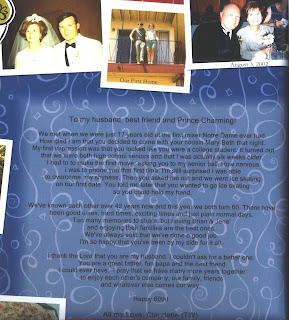 It’s the best I could ever have hoped for...

Claudette and I were watching one of those odd science shows on the BBC-A the other night that proposed that higher exposure to testosterone levels in the womb is a predictive indicator of sex, human behavior and performance levels in adult life.

They claim that differential ring and index finger measurements in adults is an indicator of womb exposure to testosterone. As such, finger length can be used to predict both physical and mental performance in both men and women.

Men usually have a longer ring finger than the index finger. The bigger the difference the more testosterone exposure. Women tend to have just the opposite. Index fingers longer than ring fingers.

After Claudette and I stopped measuring our ring and index fingers, we exchange bemused looks as we verified the researcher's findings.

In one test, a researcher visited a college track & field team of six male runners. He measured finger differentials of each and then predicted the finish order in a race based strictly on the measurements. He got 1st, 2nd and 3rd place correct. Reversed 4th and 5th place finishers and got the 6th correct.

A little Googling on the net, I turned up the following:
From LiveScience.com
"...Exposure to testosterone in the womb is said to promote development of areas of the brain often associated with spatial and mathematical skills, he said. That hormone makes the ring finger longer. Estrogen exposure does the same for areas of the brain associated with verbal ability and tends to lengthen the index finger relative to the ring finger.

To test the link to children's scores on the College Board's Scholastic Assessment Test (for which the name has changed a number of times in the past 100 years), Brosnan and his colleagues made photocopies of children's palms and measured the length of their index and ring fingers using calipers accurate to 0.01 millimeters. They used the finger-length ratios as a proxy for the levels of testosterone and estrogen exposure.

The researchers then looked at boys' and girls' test performances separately and compared them to finger-length ratio measurements. They found a clear link between high prenatal testosterone exposure, indicated by the longer ring finger compared to the index finger, and higher scores on the math SAT.

Similarly, they found higher literacy SAT scores for the girls among those who had lower prenatal testosterone exposure, as indicated by a shorter ring finger compared with the index finger."

Not sure if all this is on the up and up, but it's going to be hard not to stare at the hands of the little monsters in class starting September.
at 11:38 PM 1 comment:

If the national studies are true, then California has no chance to make this work.

"...All California eighth-graders in public school will have to take Algebra 1 beginning in 2011 under a policy approved Wednesday by the state Board of Education in an 8-1 vote.

The board decided to make algebra testing mandatory in the eighth grade over the strong objections of Jack O'Connell, the state's elected schools chief."

From: Carpe Diem and USA Today

"...Summertime means school for an increasing number of high school students who have struggled in their math courses....In March, the National Mathematics Advisory Panel reported that U.S. students lack a deep understanding of basic skills, including a grasp of whole numbers and fractions.

One reason for teacher frustration is that the state's math gurus have de-emphasized memorization in favor of "conceptual thinking." The same philosophy has crept into English classes, where "creativity" has been elevated over knowledge of grammar, and into history classes, where knowing historical trends — "the big picture" — has replaced knowing dates of important events."