In case anyone was curious, the "retirement process" for a substitute teacher cannot be any more straightforward. In all my previous employment positions there were exit interviews, hand off instructions to continuing personal, document archival, equipment return, etc.

For this job......"nothing"!
It's as simple as not sending in the required renewal fee for a yearly credential

I did receive a couple direct calls from a few teachers to work, only to let them know I retired. That prompted me to drop in on the office staff of the 2-3 schools I frequented most last year to say goodbye, receive a couple hugs and have them pass the word.

Do I miss it?...Yes a little. I absolutely don't miss the early morning calls but I do feel nostalgic at times about the people and, yes, even some of the kids I met over these last 13yrs.

Additional reading list with catchy titles on the subject of substitute teaching:

I will on occasion update this list of other on the subject:

Review from The Atlantic:  Pity the Substitute Teacher 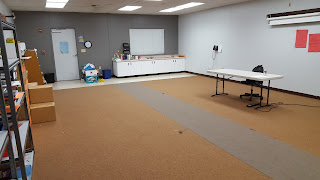 This is a photo of the last 5th grade classroom I worked as I have decided to really, really retire.

There are no desks or chairs in this room as this particular portable classroom and nine others like it are destined for the landfill over the summer. The students will return in September to two new modern multi-story classrooms with all the new amenities that the state requires.

There will be parts of the job I'll miss:  The teachers and staff with whom I'm on a first name basis and even more than a few students that I recognize by sight if not by name.

And so without further ado, the lights are off, classroom door is locked and the key returned to the school office...


I have been taking more days off from subbing to resume playing racquetball. It's a sport I took up in my previous life working in the computer world. Years after layoffs, people moving out of the area and health clubs eliminating courts made it hard to continue.

Through a posting on our NextDoor.com website, I connected with a couple of active players in my neighborhood who were looking for new members to join their group.

I let them know that I had been out of the game for about 10yrs.  At 68, I might be a little rusty and not be much competition for them. That's when they told me not to worry.

Rick is 70 and Don is 80!!. Both are very good and Don is a Senior Olympics gold medalist in the sport. After a shaky start, I'm holding my own with these guys.

We've been playing 2-3 days a week for several months now and they are great guys to hang with.  We usually play 4-5 games late morning, then have lunch.

At lunch last Thursday, Don is complaining that photos on his new iPhone do not seem to be as good as his old flip phone and wants to take it back to the Apple store.

Rick has an iPhone, so he takes a picture of me and shows Don. Don takes one of me and they compare. Sure enough, Don's photo is a bit grainier. Rick tries to "adjust it" with an app called FabFocus and the result is not much better.

Then Rick turns Don's phone over and examines it closely.  He then grabs a napkin off the table, cleans the lens, takes another picture, nods his head and hands it back to Don.

The look on Don's face is priceless. Don is dumbfounded. He can't speak. He hasn't said a word yet but I can almost see the Homer Simpson thought balloon "Dooh!!"

Rick and I can't help but laugh.

Rick: " Just wait till Ann hears about this one!"
Don: "I don't think she'll say anything. She has the same problem with hers!!"


The assignment was for a 5th grade class. After checking in, getting the paperwork and key, the admin lady noted a name on the attendance list and told me: "Do not let him use the stapler unsupervised. He tends to eat the staples".

The teacher in the adjoining classroom repeated this warning: They think it's a form of Pica but the doctors are not sure. I had to look it up. It's an actual thing.

"He has actually swallowed some so you really have to watch him. He is not allowed to have staples or a stapler in or on his desk."

This isn't the first time I've experienced weird things kids do. Three years ago there was a kid inserting a rock up his nose to see if it would fit!

As I take roll, I take note which face and desk goes with "staple eater". As the day progresses things go pretty much without incident. I did have to quietly motion to him to not chew on his pencil or eraser.

I did let slide when he switched to the arm of his sweatshirt and later to his thumb. I was pretty sure he couldn't completely swallow either one.

Summer vacation is almost over and the new school starts next Wednesday, so I was surprised that my first call for the new school year 2016-17 school came...yesterday.

We were at the movies when the call came, so I missed it.
Had I been at home, would I have taken it being the first day and all?

Well if I had, it might have been an interesting blog post for day #2.  Still...5 days left to see if I'll be working day #1 or not of the new school year.

(I checked the system....nothing posted as of today)
at 2:53 PM 5 comments: Links to this post


I'm down to last few days of my 14th year subbing and at this point I'm feeling that there isn't much that I haven't experienced...so.

Roll call and name pronunciation is usually the first bit of unintentional humor the class gets to experience with me. Yesterday's 6th grade class was no exception.

If I have the time, I scan the roll sheet before class and try to "guess" pronunciations on the names with unusual spellings.

There is one name listed that I'm pretty sure isn't pronounced as it's written and I know that if I attempt it, it might be insulting or worse so I'm not even going to try.

As I get to that name in the roll, I just stop and look up. One girl in the back is nodding her head and gesturing to continue. In fact, the whole class is intently watching to see how I'm going to pronounce this name.

Instead I ask: "Ok, I know I'm probably wrong on this one so would someone tell me how to pronounce 'I,S,Y,S,S'. I'm pretty sure it isn't pronounced the same as a terrorist group in the nightly news."

They just stare and wait so I plow ahead. "Ok, is ISIS here?"
Nodding girl: "HERE!"

It seems I'm not the first to encounter this delicate dilemma.
at 5:27 PM 5 comments: Links to this post