The Inmates In Charge?

I stumbled across this educators method of handling substitute teacher days :

I have had several reactions to this approach from the substitute teachers. Most were not prepared for it. Some thought the lesson plan directions were a prank being played on them. But once the students started class, most substitutes responded with awe at the positive behavior and hard work of the students.

A couple of substitutes have refused to allow the students to take charge of the class. To prepare for that event, the students were told, in advance, to comply with the substitute's wishes.

I wonder if this would work with Kindergarten?

Just kidding! I've actually experienced something close to this method before and I really enjoyed the experience.
at 10:35 AM 3 comments:

Do a Little Dance…


I repeat the same phrase every day I’m subbing.

Right before recess AND lunch, I tell them that if they need to go to the bathroom, now is the time.

What I said: “DO NOT return to class after lunch or recess and immediately ask to go to the bathroom!!”

So of course, the first thing after the door closes after recess I have this kid claiming he “forgot to go” at recess. I remind him of the last thing I told everyone before going out the door and that we can’t delay the spelling test just for him. He’ll have to wait.

He’s dancing from foot to foot with both hands holding his crotch pleading: “I GOTTA GO! Please!”

I’ve seen this act before and I know if I deny the request, a follow up request is usually a drink of water. The sure sign of the faker. His act, as usual, is WAY too much over the top to be believable and I’m about send him back to his seat when an amazing thing happened.

A single bead of sweat appeared between his eyes and rolled down off the tip of his nose.

He might have been hot from running around at recess but producing the “sweat drop” while dancing was a new twist.

Today set a personal record for me. I subbed for eighteen (18) teachers in four (4) hours.

I was called into be a “roving sub” for the day. The teachers had some kind of personal information audit they were required to do so my job, today, was to work 30 minutes for each teacher while they were being “audited”

As it turned out, an actual “audit” ran anywhere from to 15 minutes each so I was finished by after the initially scheduled 14 teachers were done. It was something like speed dating, as I was traversing the campus to the next classroom every few minutes of the day.

Since this was supposed to be done over a 2-3 day period to catch all school employees, the school rounded up an additional four teachers and pushed them through the audit process before I left for the day at .

Since I was only in each class for a few minutes, the kids didn’t really have time to goof off or act up knowing the teacher would be back, literally, any minute!

Back in March last year I predicted an outcome to banning vending machines on campus.

Joanne Jacobs reports on the predictable when kids see an opportunity in free enterprise on campus.

"...His parents thought he was selling drugs. He took them out to dinner to explain: He was a candy pusher using his Costco connection to buy low and sell high. Another Boulder boy got his parents to finance his candy purchases but complained when lower-priced competition cut into his profit margin."

The subbing business seems to be running hot and cold.

The first three months of this school year, it was HOT. It seemed that I was getting 5-6 requests for the 3-4 assignments a week I was able to take. I had to turn down a few advance requests two weeks in advance because of prearranged assignments.

If the week long school vacation in November is the cause then the months of December through the end of March aren’t looking much better. There is a scheduled week off during each of those months also.

Teachers are discouraged from extending vacations by calling in sick, so the substitute caller line tends to be quieter the days immediately before and after school vacations. Things should pick up again in non-holiday months of April and May.

I have a disappointment in store for teachers desperate to burn off those remaining union contracted sub days before the summer vacation in June.

I’m taking MY two week vacation to mid-May because…I can!

Email ThisBlogThis!Share to TwitterShare to FacebookShare to Pinterest
Labels: vacation

With the school holiday travel season coming, here's something to think about...

Even though the class didn’t earn (they were close!) the extra homework essay assignment today, one fourth grader asked if she could write the “SA” anyway.

Any kid that wants to write anything is a winner in my book, so she spent the last 15mins of silent reading time composing the following: 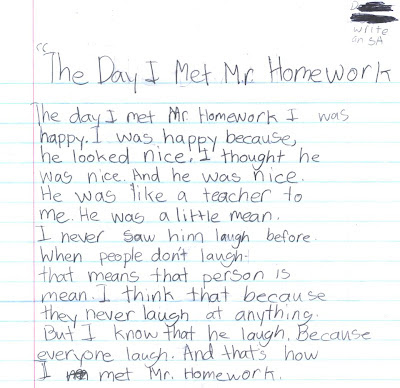 I don’t smile a lot…in school.

But, outside of school I’m a real fun guy. Just ask my grandkids.

What Do Teachers Make?


He says the problem with teachers is, "What's a kid going to learn
from someone who decided his best option in life was to become a teacher?"

He reminds the other dinner guests that it's true what they say about
teachers:

What! Are You Nuts?…

That comment was from Claudette when she heard I accepted an assignment to sub for…Kindergarten...the day after Halloween.

I accepted the afternoon class in Kindergarten for a couple of reasons.

Kindergarten isn’t at the top of my preferred assignment list, but I feel that I should try a Kinder class at least once each school year to see if my bias for the upper grade levels is still valid.

The real reason I accepted the assignment was that I hit the wrong button choice on the automated caller system. So instead of declining the assignment and expecting to hear a menu of “reason for declining” selections, I heard a confirmation message giving me the assignment number and time to show up.

Even before the kids arrived for class, I knew I was in for an interesting afternoon. On the class attendance list there were twins named (…and I kid you not) “Knowledge” and “Wisdom”.

I could be wrong but I can only speculate twenty or thirty years from now, the encounters these kids might have with their unusual monikers:

“Welcome to “Are You Smarter Than A 5th Grader”! On the show today, we have Knowledge from California. She’ll be playing for the big prize and with a name like hers; we have a sure winner…”

“President Wisdom, are you sure invading is the best way to solve Universal Health Care?...”

These kids will eventually reach adulthood. As adults, they will probably marry and have children of their own. They will more likely than not want to give those children names.

If so, my only wish for these future parents is that better “knowledge” of American culture will give them the “wisdom” to choose names that won’t cause awkwardness and difficulties as their kids grow and mature.