Good Class In a Not So Good Neighborhood…

I sub at this school maybe 3-4 times a year. I believe that the last time I was here, the police had just nabbed a guy that lived in the apartments bordering the school for murdering his girlfriend and dumping the body at the city landfill.

As we were coming up to the first recess, a man entered from a connecting classroom and ran out our door.

“Uhh…Who was THAT?”, I asked the kids. “That’s Jesse the janitor”, they answered with no further explanation.

A bit later there is an announcement that recess will be delayed until further notice and that the teachers are to keep the kids in the classroom until otherwise informed.

It seems that a kid (teenager) from the neighborhood was kicked out of his house and decided to take a nap…on the school field. When asked to leave, he replied: “That ain’t gonna happen” and went back to sleep. That was when the police were called to haul his ass away.

I found this out in the teachers lounge at lunch from the teacher that tried to get the kid to leave without involving the police. He told me that police actions like this happen on campus two or three times a year.
at 9:33 PM 2 comments:

Email ThisBlogThis!Share to TwitterShare to FacebookShare to Pinterest
Labels: G5

Odd Questions and an AARPH…

Just an odd collection of questions and new information I learned in the 1st and 4th grade classes I had last week.

“Aren’t you too old to remember stuff?”

Kind of a rude question but I WAS wondering if I had left the garage door open when I left for school this morning.

I’m betting this comes up a lot about other items of clothing that this kid may or may not have worn to school. I thought she was asking to volunteer an answer to the math question I asked the class.

On a 1st grade sentence board: “My dog says “Aarph!”

Maybe in some other weird English speaking country they do but here in America, dogs say “Arf!” Just ask Little Orphan Annie or her dog Sandy.
at 3:53 PM 1 comment:

The StatCounter has been running a bit higher than normal.

Investigating a bit, I discovered that I'm listed as #16 on a list of Top 20 Teacher Blogs on the Scholastic Resources web site!

Today I took a bold step into the unknown. I subbed a half day, pre-algebra class in middle school.

Up to now, I have limited my subbing experience exclusively to the lower grades (k-6th). Seeing how 6th graders act at the end of the school year, I could just imagine how bad they’d be as 7th and 8th graders. This year I toyed with the idea of just trying out to see how different it might be to sub in the upper grades.

This assignment was perfect for getting a taste of what subbing was like at this level. A half day assignment in the afternoon that included a prep-period had me exposed to only two sections of pre-Algebra class.

Since I hadn’t been at this school before, I arrived early, checked in and went out to my classroom already in progress. The knock at the door was answered by a face that displayed the expressions of surprise, incomprehension, confusion and a blurted “What are YOU doing here”?

With that comment the rest of the class turned to see who the kid, that I know as a “troubled leader” since the 3rd grade, was talking about.

About half of the class recognized me and greeted me with “Hi! Mr. Homework!!” while the other half suddenly seemed very curious and perplexed about this stranger with the odd name.

Now that I had unintentionally interrupted the class, I signaled that they should pay attention and get back to work. After they had been given a math quiz to start, the teacher came over to go over the lesson plan for the day.

“I guess a lot of these kids already know you Mr. Homer?” She said in greeting. I introduced myself as Mr. P while correcting and explaining the misheard nickname.

While the class quietly worked, she went over the lesson plan and answered the few questions I had about how to do the roll since I didn’t have access to the online roll system the teachers use. At the end of the period, she and the class exited the room and I waited for my first introduction to a middle school class.

Both classes were clones of each other.

The first few kids arriving early expecting to see their regular teacher instead saw a “Blast from the Past” as Mr. Homework was standing at the front of the classroom. A few even did double takes before a smile of recognition appeared.

I knew about half of the kids in each period and of course the other half wanted to know what the deal was. Even though I had written my real name on the board, “my” kids kept referring to me as Mr. Homework. A few of the new kids asked about the name but time constraints didn’t allow the telling of the full story. I replied that they should ask one of “my kids” to tell the story after school and left it at that. Both periods ended really well. I had no problems and the kids didn’t act up at all.

I SO want to try this with my granddaughters to see what happens...

Also...How another group of kids did. One even looks like one of my granddaughters...

Oh, The Temptation from Steve V on Vimeo.

Two Criers and a Khan Man…

Finally back in the classroom after a slow start for this year. The assignment was 1st grade and the teacher warned me that I had two criers in class. She told me that she would be on campus in training and would check in later in the day to see how things were going.

I’m pretty good with little kids. Kids this age don’t hold anything back. Feelings, thoughts, idle curiosity, random urges, everything and anything will eventually be articulated at unexpected times.

They don’t mean anything bad or nasty when they blurt out what might be considered inappropriate or rude comments coming from older kids or adults. It just means they are observant and stating an observation. Situational restraint is a learned behavior. It’s best to acknowledge their comment and try to divert attention to something else.

A little hand goes up in the back row.

Before she left, the teacher informed me about the criers.

My goal today was to see just how much crying I could stand before calling in the heavy guns.

She didn’t warn me about little Khan.

Khan simply ignored me in favor of wandering the room, bugging other kids, getting into stuff that wasn’t his. If there is one thing that can irritate me, it’s a kid that thinks he can ignore me when I call his name.

“He doesn’t speak English” was the explanation from the other kids.

I don’t care if you can’t speak the language. You CAN recognize your own name spoken loudly by the only adult in the room. I know a little “Khan-Man” when I see one.

Even if you can’t speak the language, you can get the idea that you’re supposed to be seated quietly on the floor if I use gestures indicating where you are to sit like every other kid in class is obediently doing.

And for a kid who doesn’t know English, he certainly can communicate, IN ENGLISH, with other kids in class and on the playground when he thinks adults are not paying attention. He also seems to understand English when I mention it’s time for recess, lunch, bathroom, computer lab and cleanup at the end of the day.

When the teacher came back after class to inquire how my day went, she was surprised that the criers made it the whole day without too many tears. She was even more surprised that the principal didn’t have to baby sit the bawler boy today.

I told her that whenever I saw either of the criers start to lose it, I’d call on them to come up and help me “do something” and it was enough to temporality turn off the waterworks. That had to be repeated several times today.

I also told her about my problems with her little “con man”. She related that Mom insists that he acts that way because he doesn’t know English. Mom is in denial and that’s not good. The teacher knows different. She’s seen the same things with his little “con-man” act that I saw today.
at 4:48 PM 1 comment:

Email ThisBlogThis!Share to TwitterShare to FacebookShare to Pinterest
Labels: G1

I've been fascinated with this aircraft since I was a teenager. Now you can own one...sorta

This post has nothing to do with substitute teaching.

Claudette decided that my eco-friendly, water saving, dead lawn look had to go so...
From here: 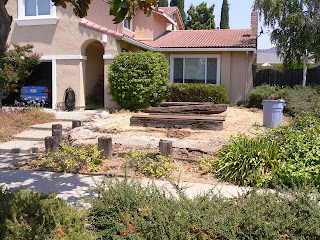 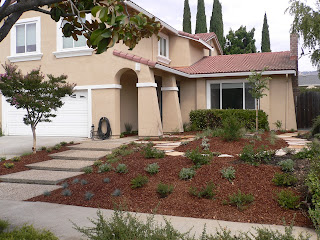 Working or Not Working?

Working or not working? That is the question for the start of this school year.

The normal process for getting an assignment starts with a computerized call to sub a particular class. If I accept, the computer issues the assignment number. Sometimes the school secretary or teacher can enter assignments and get a number directly if the job has been pre-arranged.

I don’t get paid if I don’t have an assignment number.

The first three calls this year failed to get me a number before class day. The first was corrected the morning I showed up. The teacher called me late the night before asking me to take over for the sub who also got sick that same night. The school office didn’t know there had been a switch but corrected the number to my account.

The second teacher was a definite “maybe” but never followed through. I called the office the day of just in case and was told no absence was requested for her. No harm, no foul. I went back to bed. I didn’t work that day.

Last night, I got an email requesting me for the next day (today). She said she was feeling ill and would put the number into the system if she didn’t think she could teach. As of 11:00pm last night it wasn’t there. As of 6:30am it wasn’t there. Again, I went back to bed.

Logged on the computer at 7:15am and saw an email in the inbox with the lesson plan attached. I would have to shower, shave, dress and be at the school in less than 45min.

I checked the system again to get the assignment number. The district system still says I have no assignments. No one is answering the school office phones either. Go or don’t go?

The teacher evidentially expects me to be there but hasn’t followed through about calling it in. I assume the school will correct the situation and get me the number I need after I get there.

So I arrived at the school a couple of minutes late to check in and explain why I’m there. The secretary informs me that the teacher is absent, but the lady standing next to me at the counter has the assignment number for the class. I’m not working today.