This is STAR (Standardized Testing and Reporting) week in all the local schools. This isn’t normally a busy week for substitute teaching assignments as teachers are in class drilling their students to perform well for this mandated school rating exam.

I did manage a half day (actually just two hours) assignment as Kindergarten aide yesterday. As I’m about to leave, one of the 6th grade girls from last week’s class dropped in during recess time.

She’s been sentenced here for acting up in class today. I was little surprised because she wasn’t part of the gang that was giving me a hard time last week. When I expressed my surprise that she was here instead of “Miss Issippi” or some of the others, she confided that they were in trouble also but doing something else.

As I left the parking lot and rounded the corner bordering the grass fields, I saw the “New Beatles”, “Muppet Guy” and “Miss Issippi” dragging black plastic bags while picking up trash.

They saw me and called out. I waved back as I slowly drove by… with a big grin.

The last day of this six day assignment has finally arrived! I’ve had enough. My goal today is just to “be standing” at the final bell.

Mid afternoon, the teacher I’m subbing for called me during class.

This is the first time in four years a teacher has ever called me during class. She wanted me to remind them about a project that’s due tomorrow. The project and its due date have been prominently posted on the white board every day since she’s been gone.

I turn from the phone and announce to the class that Ms. (teacher) is calling to say “Hi!...and a reminder about about the project due tomorrow!". I held the receiver out so the whole class could shout back their responses of greetings and happiness.

After class toned down, I returned to our private conversation to wish her congratulations on her wedding and indicated that the kids would be glad to see her back in class.

She then caught me off guard by asking: “How’s it going”? That’s a question like “How are you?”, “Having a nice day?” etc. It’s a normal question. The normal expected response is: “Fine”.

It was the most natural answer I could give her at this point with 32 kids within listening distance. I just couldn’t say: “Fine…”

I had already written five daily status reports detailing the planned lessons we did or didn’t accomplish, along with the various behavior problems of the last five days. The final report I left for her wasn’t any different. Under “behavior problems”, I just wrote: “--same --”.

I didn’t need to elaborate.

Saw on the school yard this week:

…only one more day, thank God!!

…At least that’s how I felt at the end of this day. Two more days of this and I’m outta there!

Even after I booted "Miss Issipi" AND "Ernie" to the office for some alone time with the “Classroom Disruption” essay assignment, the rest didn’t take the hint.

Those two and six others pretty much were a constant disruption team. While I would have liked to, I can’t send 25% of the entire class to the office!

I’m taking Thursday off unless one of the country club schools call. I never have any problems like this over there.

The teacher went off to get married and I’ve just completed the first half of this six day assignment in “The Beatles” 6th grade class where “Beatle Paul” implored his teacher to not to have me “subseetoot” for her any more.

To review, “Beatles” are four of the worst boys in this class who just happened to be named George, Paul, John and something close to “Ringo”. It saves time and effort just to call out “Beatles! Knock it OFF!” every now and again.

Not much has changed with this class except that “Paul” seems to have gone off to tour solo in another class. “George” and “John” seemed to have “got religion” and crossed over from the dark side to be pretty decent kids. That just leaves just the remaining Beatle, “Ringo”, to deal with this week.

Unfortunately, Ringo seems to have started a new band with a new kid named after one of the puppets on “”. I’ll just call him “Ernie” for the purposes of confidential privacy. Ringo and Ernie are quite a pair. They spend all day goofing off and trying to compete with each other to see who can get me to lose my cool the fastest.

I sent him off to the office with an essay assignment to complete in the principals office. With a knowing look in Ernie’s direction, the rest of the day went better. Not great, just better.

...but mostly to make it take longer. 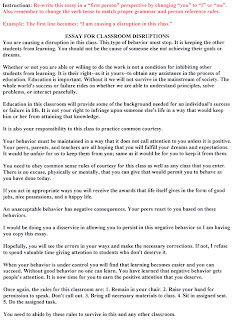 The Carnival of Education has set up it's tent at the Columbus Education Association. Admission is free but the popcorn is extra.
at 5:07 PM No comments:

Just another reason why some people shouldn't be allowed to breed

"...A fight about the decision led to a public disturbance with the father's arrest. Joseph Manzanares went to the video store where his girlfriend worked, threatened to kill her and knocked over several video displays, police told KMGH Denver.

The girlfriend told authorities they were fighting over which gang their son should join. The girlfriend, who is black, is a member of the Crips while Manzanares, who is Hispanic, belongs to the Westside Ballers.

"They have different ideas on how the baby should be raised," Sandoval said. "Basically, she said they cannot agree on which gang the baby would 'claim.'"
...

Lesson plan entry: “Hand out worksheet packets and have students staple before starting. They know what to do.”

Do you know how many possible combinations four pieces of paper can be arranged for stapling? I believe it’s something like 1024 possible variations (not counting upside down). Fortunately, I had only 32 to check and fix.

Math wizards welcome to provide the number of actual variations possible – upside down or not.

As an “emergency credentialed” substitute, I’m not allowed to work more than a total of 30 school days for any single teacher in any single school year.

The phrase “long term”, as it applies to substitute teaching, is defined by the district I work for as anything longer than 15 consecutive school days for the same teacher. So technically, I am allowed to substitute for a regular teacher for a month and a half before they legally have to replace me.

After completing this weeks four day assignment in 5th grade, I can categorically say that my personal definition of “long enough term” is anything more than two days.

This class had a clique of six (four boys and two girls) who absolutely drove me nuts from day one. I’m not sure if we even completed half of what was on the lesson plans. It was pretty much a waste of four school days for the other 28 “good kids” in my estimation.

I’m not looking forward to the 6-day assignment I agreed to take at the end of this month and another 4-day assignment the first week of June. All I can hope for is those assignments at different schools might have a better result.

Just wondering, would it have been slightly better as Dreamy Lovestory? Guess not...The kid is going to have life long problems with it either way.
at 6:48 PM 4 comments:

Email ThisBlogThis!Share to TwitterShare to FacebookShare to Pinterest
Labels: names

Tomorrow, I’m back for the third day of a four day assignment in 5th grade.

I have one particular boy who likes to wander in several minutes after the recess or lunch time break. Each time, his excuse is that he was in the bathroom, getting his jacket, lost his book, didn’t hear the bell…etc.

This is the same kid I mentally nicknamed “the wanderer” because whenever my attention is diverted, he’s out of his seat and “wandering” the room getting water, sharpening the pencil, visiting his friends, reading in the library because he lost his math book. Essentially, he’s just being disruptive when I have to interrupt the lesson to deal with it.

Me: Well, where were you THIS time?
Wanderer: In the bathroom.

Me: Everyone else seemed to have made it back in time. Why weren't you?
Wanderer: I was breaking cookies.

Now, I’ve watched the “Elmo’s Potty Time” video with both my granddaughters and I thought I knew a lot of the euphemisms for pooping, but this was a brand new one for me.

It's amazing what engineering can do to maximize driver safety...

Candidate I Dislike the Least...

I don't normally wander too much off topic with this blog and try to avoid presidential politics at all costs, but am I the only one who doesn't like ANY of the next White House tenants for 2009?

So with that in mind, I found this item excerpt on Carpe Diem (see the "must reads" blog roll at left), that just might sway my vote for the "candidate I dislike the least":

Smarter Than This 5th Grader?…

Click here for the original Yahoo News:
(Copied here in case it ages off the net)

ALLEGAN, - Is fifth-grader Kenton Stufflebeam smarter than the Smithsonian? The 11-year-old boy, who lives in Allegan but attends near , went with his family during winter break to the Smithsonian Institution's National Museum of Natural History in .

Since it opened in 1981, millions of people have paraded past the museum's , a display involving prehistoric time. Not one visitor had reported anything amiss with the exhibit until Kenton noticed that a notation, in bold lettering, identified the Precambrian as an era.

Kenton knew that was wrong. His fifth-grade teacher, John Chapman, had nearly made the same mistake in a classroom earth-science lesson before catching himself.

"I knew Mr. Chapman wouldn't tell all these students" bad information, the boy told the Kalamazoo Gazette for a story published Wednesday

So Kevin Stufflebeam took his son to the museum's information desk to report Kenton's concern on a comment form. Last week, the boy received a letter from the museum acknowledging that his observation was "spot on."

"The Precambrian is a dimensionless unit of time, which embraces all the time between the origin of Earth and the beginning of the Cambrian Period of geologic time," the letter says.

The solution to the problem would not involve advanced science but rather simply painting over the word "era," the note says.

"We did forward a copy of the comment and our paleobiology department's response to the head of the exhibits department," said Lorraine Ramsdell, educational technician for the museum.

While no previous visitors to the museum had brought up the error, it has long rankled the paleobiology department's staff, who noticed it even before the was erected 27 years ago, she said.

"The question is, why was it put up with that on it in the first place?" Ramsdell said.

Excited as he was to receive the correspondence from museum officials, he couldn't help but point out that it was addressed to Kenton Slufflebeam.

Global warming must be responsible...