Sorry! This is about a week late but I’ve been babysitting the granddaughter while her parents are in warm, tropical all this week. Not much time to do any subbing or blogging.

My wife is a big fan of Rachael Ray and her “30 Minute Meals with Rachael Ray” show on the food network.

For the few of you who have not heard of this perky Italian-American cooking dynamo, let me give you the short stroke picture. Her claim to fame is producing a complete gourmet tasting meal in less than 30min. The show is fast paced and entertaining in a down home cooking style where a “half a handful” is a precise recipe term.

Now, the week before Thanksgiving, she had a show that purported to produce the whole Thanksgiving feast in less than 60 minutes. Claudette decided that this year, we were going to try it for the big event.

Monday (T-day minus 3), she returned from the stores with all almost all ingredients required as listed on the recipe sheets printed from the shows web site. The only thing missing was….unsalted shelled pistachios and .

“I should have picked them up last week when I saw them all over the place” she lamented.

It was hard for me to believe that wasn’t available at any of three local markets she tried. She then explained to clueless husband, that WHOLE turkeys are available everywhere and are dirt cheap. The Rachel Ray recipe calls for “boneless turkey breast halves with skin attached”. The Cosentino's Market had them but the price was $46! Yikes!

So confident that I could find the elusive turkey boobs much cheaper, I volunteered to complete the shopping list for her on Tuesday while she went to work. Easy-Peasy as Rachel might say.

Tuesday morning, Costco was my first stop. Pistachios and turkey breasts. No problem. Peanuts, cashews, almonds, walnuts…no shelled pistachios. Whole turkeys, turkey legs, chicken breasts with skin attached…no turkey breasts. The butcher behind the counter said they had them last week, but some Rachael person on TV seems to have caused a run on them this week.

I was starting to get a bad feeling about my ability to locate the main ingredient for Thursday’s dinner and called Claudette to see if she had an acceptable alternative if the required turkey breasts couldn’t be located. Claudette said she since she had already spent considerable time and effort acquiring all the special ingredients for this special Rachael Ray Thanksgiving dinner that I should really try to find said turkey breasts.

As an alternative, I also mildly conjectured on just how hard it might be to buy a whole turkey and perform a bird double mastectomy myself.

I was then informed on how uninformed I was about butchering meat so off to Lunardi’s, another gourmet market, in search of the main dinner attraction. Amazingly, they had them! Whole boneless turkey breasts with skin attached. Fifteen dollars…EACH!

At this point, I didn’t care about how much they were. I have been on the hunt for over four hours now, driving more than 20 miles (at $2.50/gallon) and was getting tired. So with $30 worth of boned turkey breast, I continued the hunt for the last item on the shopping list.

Fifty miles and six hours later, I have finally acquired the only TWO remaining items necessary for our “quick and easy” Thanksgiving feast.

I greet Claudette at the door with the happy news only to find her standing there with a bag of turkey breasts she picked up at the local PW on the way home.

Guess what we’re having for Christmas? 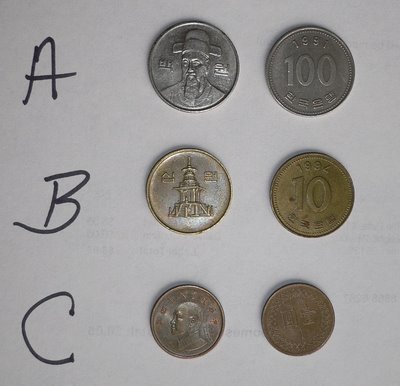 My stash of "worthless coins" to hand out at school was running low so I asked my buddies, still in the industry, if they'd like to donate to my stash.

Since they frequent overseas companies on a regular basis I figure they might run across a fair amount of "low status" (meaning something less than a nickle) coins in their travels.

Since I don't know Chinese, I'm finding it hard to locate a web site to identify the three coins above.

I already attempted google for pictures of Chinese coins without luck for the modern coin variety. If anyone knows, a posted comment or email would be helpful.
at 11:21 AM 5 comments:

I haven’t been working for most of the week. In fact this was the first assignment call I accepted this week.

Instead, I spend a couple of days trying to extract my lungs and some parts of internal organs from one of two body orifices and occasionally both at the same time. A stomach flu will have that affect sometimes. A couple of more days to recover and I’m good to go.

The district SubFinder system called Thursday night for a 5th grade assignment at a school I been to frequently this year.

I arrived at the appointed time and was given a key to a room not in the usual block of 5th grade classrooms. Curious because I know they group the grade levels together.

On entering the classroom, I notice the desks are arranged in groups of four. Again, for some reason, it struck me as odd for 5th grade. The room, somehow, didn’t “look” like a 5th either.

It wasn’t until I counted the pods of “groupings of four” desks that I realized that this couldn’t be a 5th grade class. There were only 20 desks where there should be something like 30.

It was only then I checked the class attendance list and saw this was, indeed, a 3rd grade classroom.

Without realizing it, I had a mindset going in ready to deal with 5th graders today and was temporarily disoriented to find I had to adjust for 3rd graders. That hasn’t happened before.

It seems that this teacher taught 5th grade last year, changed to 3rd this year and the system hadn’t been updated yet.

Resetting the mindset for 3rd grade wasn’t really a problem, just a mild suprise. Third graders are a fun trip. I had one of the best “problem free” and “stress free” classes I have had all year.

It MIGHT just come to this in a future election...

I’ve been remiss in my blog entries lately. It’s not that I haven’t been working. In fact, I’ve logged four class days out of six since we got back from our short midweek trip. One 4th, one 5th and two 6th grades.

Here are a few of the things I learned or noticed in the last week:

A Little Time Off... We took advantage of one of those timeshare presentation deals to take a short, mid week, three day vacation from school (...one of the benefits of part time substitute teaching).

We stayed here at the Park Hyatt Highlands Inn resort in Carmel, Calif

We spent some time at the Monterey Bay Aquarium, had some good food and a few other relaxing activities.

Cost including meals? About four subbing days! Totally worth it!!