For todays “How it went” report on subbing in this 6th grade class, I’ll turn it over to one female student who wrote following:

(Unedited for grammar and spelling)

Through my eyes and ears this is how the class act today.

In morning everyone was calm like waves of the ocean.

As time went in the afternoon, the class were waves clashing against each other. Some were howling like wolves. Some were like birds say who got in trouble, calling each other cheaters.

Each time we have a subsitute, I wish that the class would change. Maybe my wish won’t come true after all.

That pretty much says it all…

"...As state officials face pressure to intervene, the sentencing of Norwich substitute teacher Julie Amero has been postponed until April 26."


Why the delay in sentencing? I think the state it trying to get Julie Amero to plea bargain to a reduced sentence to save face.

IMHO: I think the state has a very weak case if it goes to appeal and Julie won't be spending any time in jail.
at 2:27 PM No comments:

God's Love for Teachers Only...

I came across a blog post that indicated that I might be able to get a free DVD copy of Al Gore's movie for "teachers only".

The word "teacher" is currently in my job title, so I thought I'd give it a shot. I certainly wouldn't PAY to watch a politicians movie on anything about science, but I'd give it a "look see" for free.

So I did a Google search for:
Free DVD for Gore's movie

Google's response:
"Did you mean: Free DVD for God's love"

The Global Warming issue IS pretty much a universal religion now, so maybe Google DOES have a point?
at 9:55 AM No comments:

How do I know…

Last week and most of this next has me scheduled almost every day. Same school, three different teachers, all 5th grades.

It might be when I start getting personalized notes from parents:

On the second day of my four day assignment, I called for everyone to turn in their homework from last night. The left behinder kid from last month came up, and without saying a word, handed me a note from his mom.

This letter is to inform you that J-- is on modified homework. What he is turning in is what he did within the agreed time frame that I have with Mr. (real teacher). So, do not bench him as his work is not incomplete (sic). If you have any questions please call me at (home number) or (cell number)

Now I’m not sure what “modified homework” is but if it’s anything like the “modified classwork” that J— turned in the rest of the week, it’s not much.

The irritating part of this preemptive communiqué is that I hadn’t even threatened to bench anyone over incomplete homework. My job is just collect what the kids turn in and possibly leave a note indicating who didn’t do any.

It might be when it’s proven that I’m not smarter than a 5th grader:

Last Monday’s class of really bright kids breezed through all the classwork with about half an hour to kill before the dismissal bell. The kids were really great for me, so I gave them the rest of the time to break out the games and puzzles for some free time. If they had given me a hard time that day, it would have been “SILENT READING” until the final bell.

Anyway, one of the boys approached and asked if he could challenge me to a chess game. This class had been so perfect today that I felt safe allowing my vigilance over the class to relax enough to accept the challenge.

Mistake! I hadn’t played chess in…oh…about 10 years? Still, I should be able to hold my own against a 10yr old!

After the first dozen moves, I lost my queen. It was all downhill after that.

I tried to concede at least twice, but the kid wanted to play it out. Evade and delay became my game strategy. I only had to last until the final bell. I could then concede but not actually “lose”. Yea, yea, I know. A minuscule, face saving distinction indeed.

Well the final bell came and went and the kid would not let me quit! I’m down about half the pieces I started with and this kid would show no mercy.

I was finally “saved” by kid’s mom who pried him out of the classroom a full fifteen minutes after the final bell threatening that they would be late for his music and martial arts lesson.

My excuse for poor play? I lost the game on purpose! I just wanted to build his self confidence. Self confidence! Yea, that’s the ticket!

(I am NOT smarter than SOME 5th graders…)

I've been waiting for this documentary to show up on the TIVO so imagine my suprise that it's already on the web. The "Glogal Warming" political scare is the same as "Y2K" political scare without a deadline.

Subbing assignments so far this month have been pretty sparse. Counting yesterdays 6th grade class, I can count them all on two fingers. Yesterday’s class was excellent. No problem kids, all hard workers and I had a lot of fun with them.

The only incident of note, and not with just this particular class, is that telling time is still a baffling concept to some of the DA (Digital Age) generation.

I can’t count how many times I’ve had the following exchange:

Me: What time does your cell phone say?

Every classroom I visit has the traditional analog clock with big, little and sweep hands to let me know how I’m tracking on the lesson plan. Now, while it’s true that sometimes the clock isn’t set to the correct time or flat out isn’t working at all, I’ve yet to see a precision digital timepiece replacement in the classroom.

This inability to tell time isn’t relegated to any particular age group. I’ve had similar dialog with every grade from Kinder to 6th and in every instance I was right. Well, almost every time.

Now, where did I leave my buggy whip?…


For the record, I'm not a fan of Apple Computers, but their commercials are GREAT!.
at 8:45 AM 1 comment:

Mom Drives Kid to the Fight...

--------
FOLSOM, Calif. - The mother of a 13-year-old boy was arrested for allegedly driving her son to a fight with another boy, then cheering him on as he struck his smaller opponent. Police say the mother shouted down another woman who tried to break up the fight across from Sutter Middle School on Monday. A student caught the scene on video.

Renee Ann Honnold, 37, of Folsom, was arrested Thursday on suspicion of two felonies, endangering the life or health of a child and criminal conspiracy, as well as contributing to the delinquency of a minor, a misdemeanor. Her son was cited for suspicion of misdemeanor battery..."

Wanna bet this kid is a "problem child" in school?
at 2:22 PM No comments:

No calls to sub this week so I have time to see what else is going on out there in the blog-o-sphere.

Elementary grade school math instruction has been pretty basic since the invention of the one room school house and the schoolmarm.

Teaching addition, subtraction, multiplication and long division has been the same for at least the last couple hundred years (…that I know of)

I have, on occasion, questioned the value of teaching estimates in 2nd grade math and when I asked other teachers the “Why” question, the response is: “It’s in the state mandated curriculum. We don’t have a choice”. Meaning that teachers have no leeway in what and how certain subjects are taught.

While cruising the posts of blogger NYC Educator, I came across something even more alarming than teaching estimates.

Take a look at what some doofus-butt “brilliant” educators are pushing to replace the “old way” of teaching math for the 4th and 5th grade levels in favor of constructivist-based math programs such as TERC (pronounced "turk") Investigations or Everyday Mathematics.

(Warning! It’s 15+mins in length. Dial-up readers may want to wait till you have access to a faster connection)

Some points I came away with:

Now what would happen if some school district or the state of mandated a switch to this “improved method” of teaching math? What will the teacher have to say when asked why my granddaughter can’t divide 24 by 6 without a calculator?

I’ve already heard the answer: “It’s in the state mandated curriculum. We don’t have a choice”

While I think there IS value in the TERC and other constructivist methods as an additional way to give H.S. or college students a different way to look at problem solving, I see no value in using it as a replacement for the tried and true basic math algorithm skills learned at the elementary school level.

It’s sad to say but parents would be well advised to skim the text books, at least at the elementary school level, your kids will be using each year to monitor how proficient or deficient your kid might be at the end of the schooling program.

What a great weekend... 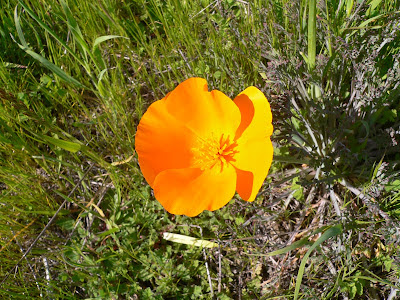 Finally a break from the cold rain here in N. California.

We went for a long walk in the hills behind where we live and it's looking a lot like spring!
at 4:32 PM No comments:

My approach to each new day in class is, all kids are angels unless proven otherwise.

So today, as I opened the door to Mr. Outlaw’s 6th grade class, I was sure we wouldn’t have a repeat performance of last month’s encounter.

In case you missed it, I booted this kid to the principal’s office for being a constant pain in the ass disruption in class.

Unfortunately, it seems that Mr. Outlaw has a short memory AND gained a couple of posse members since the last time I was here.

I held it together for most of the day, but finally caved and booted Mr. Outlaw and one of his sidekicks next door to another 6th grade class for some "sitting on the hands" time.

This school has great teachers that encourage exporting sucky students into neighboring classes to save the substitute teacher’s sanity contemplate the errors of their ways.

That left the weak member of the posse to cruise by every 10 minutes to ask if they could come back to class.

Just how many synonyms for the word “NO” are there?

“ R. – If he smells like he had an accident, send him to the office to call for clean clothes.”

Now my job includes potty training for an 11yr old?!!

At the first hint of classroom flatulence, cheese cutting, fart, gas passing, tooting, pooting, air biscuits or other gas polluting the ozone odor am I supposed to assume it’s R? Then do I then have to ask him if he was the guilty party and needs to leave the room?

Even if the kid does have some control problems, shouldn’t HE know when he poops his pants and decide on his own to go get cleaned up?

If this has been an ongoing (no pun intended) problem, wouldn’t you expect his parents to invest in something like the NASA urine and fecal containment system, good for 15 hours or 900 miles whichever comes first?

I already did the potty training bit for my own kids and still do, on occasion, sniff butt to change my 2yr old granddaughters.