There are several things that will distract me in the classroom but, by far, the topmost irritant is the plastic water bottle that seems to populate every desk in every grade.

If I stop the lesson and laser sight the “bottle cracker”, he/she will eventually notice and will slowly remove it from the desktop, stashing it of sight.

If they are really into the bottle music thing and absolutely clueless to their surroundings, it takes the other kids at the table to prod the kid’s attention back to the front of the room where he/she discovers that I’m intently staring directly at them.

So it was in a 2nd grade classroom yesterday that a tiny girl bottle cracker (aka: BC) got my attention. After asking that the bottle be put away, “BC” blurts: “But it’s my science fair spearmint!!”

I looked a bit more closely and saw that one bottle was 1/3 filled with dirt and some leaf bits on top. The other looked like it had about the same amount of cloudy water.

Me: That’s nice but let’s not play with the bottles during class, ok?
BC: It’s about worms!

Me: We’re supposed to be doing math right now. Maybe we’ll have time for science fair later.
BC: See! Worms live in wet dirt and eat leaves! Worms can’t live in just water by itself!

BC is undeterred and excited now as she approaches the desk with both bottles. She shows me the cloudy water bottle with five or maybe six worm parts floating on top.

Now I’ve lost control of what I was supposed to teach about math. Several kids come up for a viewing of worm carcasses in a bottle as BC proudly displays the cloudy bottle for each to see.

Now, it’s not my nature to be real intimidating to little kids. I would not allow a kid to interrupt the lesson like this if it was a 6th, 5th or even a 4th grade classroom. But at this point if the kids seem interested in “science” and even if they have to re-do skip counting as an introduction to multiplication tomorrow; I’m going to let them “off the leash” for a bit.

One of the boys is looking intently into the cloudy bottle and gets excited. “One of those worms is moving!” he announces to the rest. Now we have several little hands and heads trying to gain a look at the miracle of worm resurrection!

BC is confused and surprised as several other kids confirm the sighting of an un-drowned worm in the bottle. She looks intently into the bottle several seconds attempting to confirm the presence of the un-dead worm.

What happened next was surprising but not totally unexpected.

I don’t know if BC actually SAW the worm move or not but it’s a moot point as she snatched the bottle back and began violently shaking the bottle for several seconds.

Now, as I understand the process, science fair projects involve stating a theory, designing an experiment to test the hypothesis and doing the experiment to measure the results to prove or disprove the theory.

Is that "REAL iron" in iron fortified foods?

The Death of Cursive…

The first assignment after the winter break was a rainy half day in a 5th grade class. The lesson plan had a typical work load including a practice spelling test.

Plan instruction: “After the test, have them self correct with handout and practice writing each word 5x.”

Easy peasy lemon squeezy…until the end of the test when I handed out the spelling work sheet (see below) for self correction purposes.

The first hands started to appear: “Do we have to write the words five times in cursive?”

Since this is a spelling test and the emphasis should be correct spelling over the method; I allowed those who wanted, to “print” instead of “writing” the words to do so.

That satisfied most but not all; “But, I can’t read cursive!” was the next complaint.

Sure enough, there was a note on the lesson plan that stated I might have to “print” the spelling words on the whiteboard for those who can’t read cursive. Amazingly, I was not surprised that today’s 5th graders can’t write cursive longhand. I was surprised that I expected them to be able to read it! Why would I expect them to read longhand when they don’t write?

Personally, my penmanship is so bad it’s illegible. Other than my signature, I almost never write cursive because I never had to use it. The introduction of the typewriter and subsequently the computer keyboard had pretty much made “fancy writing” obsolete by the time I left school. Fortunately for me, a 30 year career in software development never once required writing documentation longhand.

While there are some who might be nostalgic about loss of beautiful penmanship, I can’t see the point other than as artistic exercise. Try Googling “death of cursive” and you can see the handwriting on the wall, so to speak.

(I was going to post this using a cursive font, but the Blogger editor doesn't provide one!) 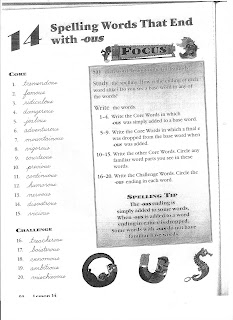 I didn't know they had already invented a word for this:

The last week leading into this winter break week was pretty busy. The four assignments in five days went pretty quickly. Only two incidents of note are worth mentioning.

The first was having a “ninja throwing star” sail by my ear as I opened the door to the classroom in the morning. No, it wasn’t a REAL throwing star but one made of folded paper.

The 4th grader ninja kid was more surprised than I was at how close it came to giving me a potential severe paper cut.

I could have sent him off to the office, but instead I made him hand over his entire origami arsenal for the trash can and wrote a note to his teacher for future discipline disposition. I didn’t send him to the office because this school has a weak disciplinarian principal and I knew nothing of consequence would come of it.

“Boys will be boys!”

The second incident occurred at the same school the Friday before the break. I had about 20 more minutes to go over the lesson plan for this final day when there was a knock on the door. The dad, standing there with his son, clearly wasn’t expecting me as I opened the door.

The dad and son had just come from meeting with the principle about an incident that had happened previously in the week. His kid was allegedly punched by another kid with a sharp pencil sticking out between the knuckles of his fist. He wanted me to make sure this other kid would not bother his kid today.

That was the shortened story of the conversation. The actual conversation lasted for most of my remaining prep time and included threats of suing the school, the other kid’s parents, the principal, and having the aggressor kid expelled from school etc, etc, etc…

I told him that I completely understood his concerns and promised to watch out for the kid today. I would also leave a note for Mr. K to inform him about his concerns for the safety of his kid when school resumes after winter break. That’s pretty much all I can do as the daily replacement for his teacher.

As the pair turned to leave, I saw the principal making his way out to my classroom.

He saw the pair leave. He told me that “aggressor boy” does have a reputation in the school but for the other kid not to have reported the problem on the day it occurred made him doubt which boy to believe. He asked what thoughts I had about having “aggressor boy” in class today.

I’m thinking: “You want ME to make that decision for you? Ok, then…”

The last day of school before a week off doesn’t have much going on in the classroom so I suggested that he should keep “aggressor boy” in his office for the day, and I would send down his daily work to do.

I don’t need any more complications today.
at 6:46 PM 1 comment:

Do you know where the Faroe Islands are?

Me neither, until I saw it listed on the blog FlagCounter tracker (see the link in the left hand column of the blog) .

"...The population of the Faroe Islands is largely descended from Viking settlers who arrived in the 9th century. The islands have been connected politically to Denmark since the 14th century. A high degree of self government was granted the Faroese in 1948, who have autonomy over most internal affairs, while Denmark is responsible for justice, defense, and foreign affairs. The Faroe Islands are not part of the European Union."

Geography is much more interesting this way.
at 3:43 PM 1 comment:

I intended to take the day off yesterday. After six straight classes of 5th grade children, I needed a break.

Anticipating a very long weekend until my next scheduled assignment on Wednesday, I declined calls on Friday, Saturday and Sunday to take classes for Monday and Tuesday mornings. After all, being around children constantly can drive a person a bit batty. Just ask any mother of 2 or more school age kids.

Then Sunday night I got a request to sub Monday at one of the three schools in the district I hate to turn down. I hesitate to turn them down because they don’t call that often. More importantly, the quality of student, in general, tends to be more…well…how should I politely say this?...”mature” is an apt description.

There you have it; I passed on several offers to substitute children in favor of one class of young adults the same age.

Now, if only some of the adults I have to interact with wouldn’t act like children most of the time, life would be good!!
at 5:14 PM 1 comment: