The first half of school year 2010/11 is done and I’m surprised to report that my initial reservations about the unavailability of work didn’t come to pass. The frequency of assignments is about the same but I’m pretty much working at only 20% of the schools in the district instead of the usual 85%.

I wasn’t expecting to work the last Friday before Christmas break so the call from one of the two elusive 15% of schools I never get calls from was a double surprise. I of course took the 6th grade assignment.

The two schools that represent the “elusive 15%” are two of the higher performing schools in the district (API scores of 950+ each). They rarely have teacher absences and when they do occur, I’ve been told, they arrange for their own preferred substitutes. They rarely had to access the “random substitute” line.

Since the office rarely had to deal with the substitute line, they never instituted a priority list of preferred substitutes for the system to work from when the list of fired teachers was exhausted. I was lucky enough to be the random pick that day.

In the classroom, the teacher’s lesson plan was addressed to “Dana”. That told me that either this school HAD found away to get around the new calling rules or that “Dana” was a RIF’ed teacher that she had somehow arranged to have work for her today.

While going over the lesson plan, the teacher in the room across the hall walked in to introduce herself and ask if I had everything I needed. It took a few seconds to realize that we both recognized each other.

“Hey, Aren’t you the guy the kids call Mr. Homework?”

I had worked for her a number of times when she was at a different school several years ago. After exchanging several brief exchanges of “what happened to old acquaintances”, she left to get ready for her own class.

The rest of my day went well, the kids were well behaved, and their teacher came in just before the end of day bell. She introduced herself to me and asked how my day went. I handed her my end of day report which she read silently while the kids watched intently.

“Well, according this report it looks like you guys did really well! Merry Christmas and you’re dismissed!”

As I was leaving, the teacher I met before school today came over to ask how things went. I told her it went well. She told me that she had gone and talked with the office secretary to put in a good for me and get me placed on their priority substitute short list.

Does this mean I’ll get more work at this school the 2nd half of the school year and possibility next? Only time will tell if the unintended consequence of the limited access rule to assignments will turn into an unintended benefit for me next year.

Claudette and I went with some friends on vacation to Kauai, Hawaii. I always like upgrades on vacation but not this time.

Claudette promptly sprained her foot within 20min after checking into the hotel. The next day, we spent some time at the urgent care facility on the island to have the “sprain” upgraded to a “fracture” which pretty much kept her out of the water for the duration. It’s hard to swim strapped into a toes to knee length black “walking” boot. This didn’t prevent the guys from doing a little deep sea fishing which provided us with a few nights of BBQ’d Ahi and Ono while the women relaxed in the warm Hawaiian sun.

Upon our return, Kaiser Hospital re-examined the foot and upgraded the black walking boot to a solid purple cast for a month. It seems the fracture is now upgraded to a special kind of fracture that required a cast, then a period back in the boot and finally back to shoes once again.

Now, personally, I’m not fond of change. As long as something still works, why change? That argument works great for staying with the same partner for 40yrs but doesn’t work so well for not getting new carpet just because it’s outdated. It’s ONLY 35yrs old! Sure it’s rich rust color is more like faded orange now, but it still covered the plywood floors and prevented splinters in my feet, right?

Well, the carpet WAS pulled up in a few places, repaired in a few others with my trusty staple gun and, as we discovered later, a habitat for a few termites near an outer wall in one of the bedrooms.

Just when I thought he was done, he informs us: “While you’re at it you should block the access vents with screening in the attic because birds have been nesting in the insulation up there”. Evidentially, bird waste in the insulation calls for removal and installing new insulation.

I think I could have used this feature a few years ago in a 2nd grade bilingual Spanish class...

Hello! My name is Mr. Homework.

Substitute teachers are encouraged (if not required) to leave an “end of day” status report to let the teacher know how the little darlings behaved (or not). One of the first things I announce at the beginning of the day is that I do make notes about how the day is going and that…I make a list.

“Kinda like Santa does with his ‘Naughty and Nice’ list and you don’t want to be on my ‘naughty’ list at the end of the day”, I warn.

As it turns out, I discovered that I’m on a few lists also:

Tips and Tools: 100 Best Blogs by Teachers for Teachers In the miscellaneous group

Learn Me Good: Guys Who Teach and Write Blogs (no order)

Kids Learn to Blog: Blog Resources For Teachers (no order)

University reviews Online.com: 100 Most Inspiring and Innovative Blogs for Educators #46

The Cornerstone For Teachers: Favorite Blogs (listed with the bus driver)

Is climate change more about the science or...politics?  You decide.

Everyone performs better at an assignment IF they like doing it. Getting kids interested in reading and writing to enjoy doing it is no exception.

I remember one part of the CBEST qualifying exam for my substitute teaching credential was to submit a timed writing sample about my thoughts of “cheating by high school students on exams”. Needless to say my rambling, full page, written response could have been better said in three short sentences: “I’m not for it. Cheating is bad. Don’t do it".

I don’t like writing under deadline pressures or on subjects I know nothing about. I remember an essay in college that I failed miserably because I could not “imagine a day in the life of an Eskimo boy”

With that digression introduction, I was working in a 4th grade classroom when the next item in the lesson plan listed: If they finish early and have extra time they are allowed to read a book or do "PenPals".

“PenPal time” is writing a letter to anyone in class about anything, stuffing it in a large mailing envelope, addressing it and putting it in the outgoing mailbox. This teacher had one of those huge rural route roadside sized mailboxes on a table in the front of the classroom. Periodically, when the “Mailman of the Week” student noticed the red flag up on the mailbox, he could then deliver the mail to the Pen Pal addressee.

Even I got mail: 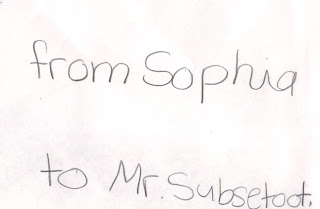 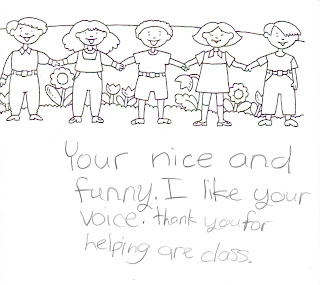 I assume that spelling, punctuation and grammar will follow as the year progresses. I’m sure Sophia will learn to spell “substitute” before she gets to 6th grade…
at 4:44 PM 5 comments:

Email ThisBlogThis!Share to TwitterShare to FacebookShare to Pinterest
Labels: G4

Ever wonder what would happen if Santa ever needed a substitute for the big night? Well it might go something like this:

The following is an excerpt from a speech by a She-Claus mom to the elves just before she embarks on her Christmas Eve night - delivering toys to the good girls and boys around the world.

I am NOT going to ask you to be quiet AGAIN!  Do you understand?

First things first: Do these flannel pants with white cotton cuffs and added padding in the buttocks make my butt look big?

Nevermind, nevermind. Don't answer that.  Now, let's get down to business...."