Katie put a booger on my chair!!

As designated chair inspector for the day, I pointed out that the indicated booger on his chair was just a scuff mark.

“It’s NOT A BOOGER! Now let’s get back to work and quit tattling!”

At first impressions, it appeared that the short, cute little girl was being picked on and bullied by some of the other kids in the classroom. But after the first half dozen, tattletale complaints, I started watching Katie with more than the usual frequency of required scrutiny. Initial impressions can be wrong.

It’s the second day in this classroom and I’m see that “they” aren’t picking on Katie, SHE is picking on “them”!!

Katie goes out of her way to tick off as many of her classmates as possible in the most irritating ways and she’s very sneaky about doing it!

When she thinks I’m not looking in her direction and she’s off on the next quest to push some buttons. If she’s not constantly blowing her nose and pretending to wipe it on chairs, desks and bodies on her way to the trash can, she’s snatching anything that isn’t nailed down off/under/around the desks of other kids as she wanders the room.

Katie (not her real name) is a 3rd grader at the country club school just up the road from where I live. She is having a hard time making friends. It’s pretty easy to see why.

When I had a chance, I called her over for a quite conference to point out that I was aware of some of the things she was doing.

Me: Do you think maybe that when someone takes things without asking might not be the best way to “borrow” stuff?
K: (nods yes)

Me: Katie, can you see how words like ‘please’, ‘thank you’, and ‘May I’ might help you to make friends.
K: I don’t have any friends.

Me: No friends at all?
K: (she nods the affirmative).

Me: Do you see how taking other kids’ things and putting pretend boogers on peoples’ stuff might not seem “friendly”?
K: (another nod)

Me: So why don’t we try to do the ‘friendly’ thing and “ask” permission before “borrowing” stuff and also stop putting pretend boogers on people.
Do you think that might work?

As she makes her way back to her chair, I watch as she snatched a pencil off the first unattended desk she passed.

My end of day report, including observations about Katie, was probably not new information to the teacher.

Simon gets a lesson about "Judging a book..."
...but you'll have to jump over to YouTube to see it.

Email ThisBlogThis!Share to TwitterShare to FacebookShare to Pinterest
Labels: off topic, talented, video

After Monday, comes another day at a different school and classroom... 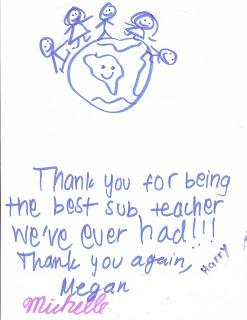 How Was Your Day?

That’s the usual question Claudette greets me with when I get home.

“Well, let’s just sum it up with the last exchange I had with a future inmate as he’s leaving at the end of day”

Kid: Are you gonna be here tomorrow?
Me: Ahh, No.
Kid: Yay!
Me: (almost thinking out loud) Yay!

Awoke this morning to see this little fellow in our back yard. We live almost on the south/east outskirts of San Jose, Calif but certainly not considered IN the country.

We HAVE seen lots of possums, raccoons, deer, turkeys, ducks and wild geese. We can hear the coyotes in the hills at night behind us and have even seen a few out while walking in the hills, but I've never seen a fox in the 30yrs we've lived here.

I think it's a grey fox. Can anyone confirm? Pretty animal... 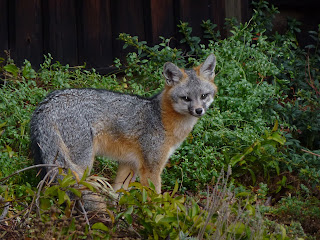 I remember being the target in 6-8 grades in the 1960's. It pretty much ended when I got into a fist fight with one of them and the nuns had to pull me off him. We went to separate High Schools the next year.

Email ThisBlogThis!Share to TwitterShare to FacebookShare to Pinterest
Labels: commentary

Kahn Academy on 60 minutes. This combined with iPads in the classroom could be the classroom of the future...which could/should easily be...NOW!

Are Textbooks in the Classroom Dead?

A friend of mine sends his daughter to a H.S. that has eliminated almost all text books in the classroom. The school, instead, issues all students an iPad as a replacement textbook resource. The coming of age for iPad like devices in the classroom is becoming more prevalent as Apple reports that more than 600 schools across the nation, including the one my friends daughter attends, are ditching the classic text book.

I think it’s a great idea that has only one tiny potential glitch. Hardly anyone is going to steal a 6th grade math book from the dozens of backpacks left unattended outside a classroom or on a bus. Dozens of school backpacks with iPads inside are another matter.

My friends H.S. assigns liability for the iPad to the parents to make sure it’s returned to the school intact and undamaged. That school offers flat fee insurance of about $50/yr that covers damage but isn’t mandatory. The parents can opt out and risk the cost of replacing it on their own or insure it elsewhere with one of many private policy issuers.

But for now, and until the schools I work are able to maintain a working day-to-day network, I won’t have to worry about connecting and navigating the electronic text books.

…But that day APPEARS fast approaching!
at 6:51 PM 1 comment:

Email ThisBlogThis!Share to TwitterShare to FacebookShare to Pinterest
Labels: commentary

I might be paranoid but then again, maybe not.
Look who's been visiting the blog lately...

This time YOU get a chance to give away free stuff to the school and/or the teachers you think deserve free stuff...but only till the end of the month.


"...Worth Ave Group’s “Greatest Teacher” Technology in Education Give-away. The grant will give away $150,000 in grants and prizes to teachers and their schools who get the most votes for the "Greatest Teacher in America," including a $25,000 education technology grant for schools, iPads for teachers, etc. Voting runs through March 31st, 2012."

If you want to nominate a teacher, submit your entry here->  http://www.worthavegroup.com/giveaway/
at 5:19 PM No comments:

From Right On The Left Coast: Every Teacher Wants One:


It currently looks a bit bulky to fit in my substitute teacher bag, but I'm sure with new revisions they will get it down to the size of a laser pen...eventually.

But they'll have to do something about the name. Can't bring something with the word "gun" to school although "glue gun" is still acceptable.  I don't think this thing would get the same pass.  It will have to pass the: "Will it get the S.W.A.T. team upset if you point it at them" test.

I'm sure with time and improvements, every teacher will be provided one as standard classroom issue.