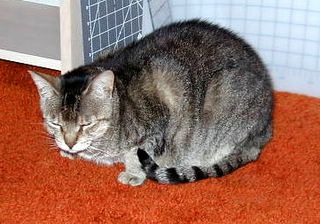 Nothing beats a tiring day like rounding up a bunch of sugar high Kindergartners. Unless it’s medicating an unwilling cat...

My wife has a cat. Two cats actually.

It’s been three years since we got these cats from the local rescue shelter. We haven’t had to deal with flea problems owning these hairy fur balls for pets…until now!

After three flea free years (try saying that 10 times in a row!) and the onset of summer, the fleas have somehow found their way indoors to feast on these two over fed mobile blood lunch wagons. So we got this overpriced, liquid stuff you’re supposed to rub in on the back of the cats’ neck once a month to get rid of the biting bugs and prevent them from coming back.

The “easy” cat was no problem. A pat on the head, scratch the belly and a dose on the back of the neck and we’re done.

The other cat, aptly named ROZILLA, is a different story. Rozzee hasn’t ever been to the vet because she doesn’t trust us enough to pick her up. When I’m occasionally stupid enough to try, I get a twisting, furiously hissing, screaming, spitting, ball of fur and muscle which usually results in making us both very wary and unhappy with each other.

So we’ve come to somewhat of a truce. As long as I don’t try and touch the cat with both hands she’ll submit, somewhat flinchingly, to an occasional one handed scratch behind the ear.

Our plan was simple. I was to immobilize Rozzee with a beach towel and expose the neck area for Claudette to apply the medication. The execution of the plan wasn’t so simple.

Festooned with said beach towel and thick leather work gloves like some demented urban toreador, I approach my quarry. The cat immediately shoots full tilt from room to room with me never getting within five feet of a capture opportunity.

“Plan B”: Close off all the doors in the upper hallway. Chase the cat up the stairs and corner the cat at the dead-end linen closet door. Claudette will stand guard at the top of the stairs to prevent escape in case I miss.

Round and round downstairs we go until Rozzee bolts up the stairs according to plan. I cautiously approach. Coming in low while blocking off the only exit with the towel, I manage to get most of the cat wrapped in the towel. Unfortunately, “most” isn’t enough and I’m getting mauled by the toothy end and one exposed claw.

The cat manages to squirm loose and shoots down the hallway toward Claudette who’s supposed to be blocking the exit down the stairs. Claudette, no fool, immediately abandons her job as “blocker” by pressing flat against the hallway wall and shrieks as Rozzee zooms past. Nice blocking job there, partner!

We regroup and decide to have another pass at “Plan B”. The problem we have now is that the cat has figured out “Plan B” and won’t be tricked into going up the stairs.

So for the next twenty minutes, we go round and round from the living room, to kitchen, to family room, behind the piano, behind the entertainment center, under the couches until the cat and I are exhausted and sweating like hard run horses in the Kentucky Derby. I’m sure any neighbors looking in through our living room picture window that night would have found the spectacle better than any reality show on FOX that night.

The cat finally is exhausted and panting hard. She latches all four claws in the seat cushion of a dining room chair and howls as I cover her with the beach towel with one hand and hold her head with the other while Claudette applies the medication.

Job complete, I quickly step back releasing both ends of mad cat at the same time expecting her to bolt as far away from me as possible. Surprisingly, the cat remains clamped to the chair for the rest the evening probably resting up for next month when we get to do it all over again.

Maybe Kindergarten isn’t so bad after all.

I can picture all of that! I am with your wife, when an angry kitty is coming my way, I abandon my blocker job quickly!

Luckily, our three are nice and friendly (especially since we stopped the continuous feeding and they only get food twice a day now). lol

I just want to correct one of Mark's statements. Neither Mary, "the easy cat", or Rozee are overfed. Mary only weighs 8 pounds and Rozee maybe 9. We can't tell for sure because we really can't pick her up.